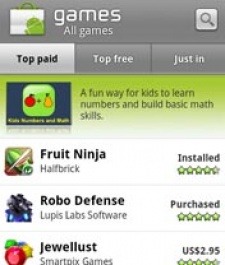 September 16th, 2010 - 10:21pm
By Jon Jordan, Contributing Editor
Gaming on Android has been given a big boost over the past couple of weeks - in the main thanks to the efforts of social gaming platforms such as OpenFeint and Scoreloop, who have been squeezed on iPhone by Apple's Game Center.

Indeed, released yesterday as part of the first wave of OpenFeint enabled cross platform games, Halfbrick's 99c Fruit Ninja has leaped straight into the top position on the Android Market within 24 hours.

Perhaps that's unsurprising considering the game has been downloaded two million time on iPhone, so it has a lot of viral presence.

Still, demonstrating the immaturity of Android, despite the tens of millions of devices running the OS, Fruit Ninja's downloads are listed being in the range of 5,000 and 10,000 with 652 ratings.

Not bad for a day's work but probably not enough for Halfbrick to retire on.

Yet it's a positive sign for developers looking for an opportunity to branch out, and stand out, from the 250,000 apps and games on Apple's App Store.