Platform could be on terms with iPhone by November

October 7th, 2010 - 01:27pm
By Keith Andrew
Another comScore release, another set of statistics suggesting Android is making serious ground in the US.

Following on from last month's report, which claimed Android had doubled its US share throughout the course of 2010, the latest numbers suggest the pace of its gains shows no sign of stalling.

Indeed, though Android remains in third place according to comScore's numbers for August, at the current rate, it will be challenging iPhone for second spot as soon as November.

RIM, predictably, remains the main player with 37.6 percent of the smartphone market  although its share continues to fall, down more than 4 points from May.

In contrast, iPhone is managing to hold its share, its August figure of 24.2 percent down slightly from May's 24.4 percent share, but up from July's total of 23.8 percent.

Nevertheless, by seemingly failing to capitalise on BlackBerry's shrinking share, iPhone is a party to a tightening of the market at the top, with Android moving in on both platforms on 19.6 percent in August  up 6.6 percent from May and 12.5 percent since January. 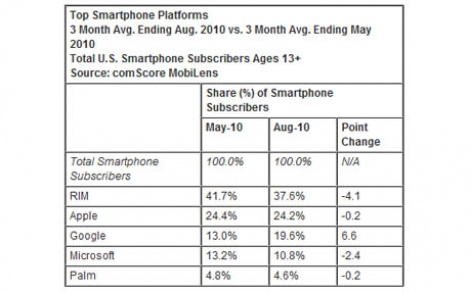 "55.7 million people in the US owned smartphones during the three months ending in August, up 14 percent from the May period," added comScore.

"Despite losing share to Google Android, most smartphone platforms continue to gain subscribers as the smartphone market overall continues to grow."

When it comes to OEMs, Samsung is strengthening its position at the top, its share up 1.2 percent since May to 23.6 percent in August.

LG sandwiches the two, seemingly managing to hold off Samsung's surge with its share of 21.2 percent identical to July's figure and just 0.3 percent down on May's share. 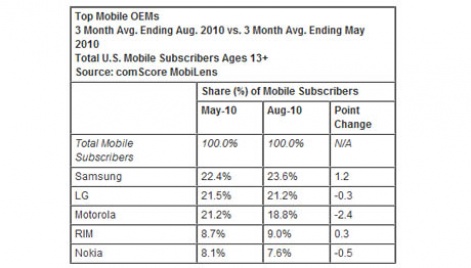