39% of iPad owners have bought a game

But 32% haven't downloadable anything

October 22nd, 2010 - 01:13pm
By Keith Andrew
The question of what consumers use tablet devices for might seem a little nonsensical for anyone who has any experience with current frontrunner iPad.

Nonetheless, research firm Nielsen has conducted a study of 5,000 consumers designed to pin down whether tablet usage differs from other devices.

The conclusion? The majority of tablet owners are inclined to pay for content, rather than download free apps.

The ultimate paygroundNielsen's stats, generated from the responses of owners of tablets, e-readers, netbook, smartphones or media and games players, claim 63 percent of iPad owners have purchased at least one paid app on their device.

It's a situation no doubt aided by the sheer number of paid apps on the app store compared to their free counterparts  Distimo having long reported that, like most other marketplaces, paid apps dominate iPad's line up  but might also be a reflection of what consumers use their iPads for. 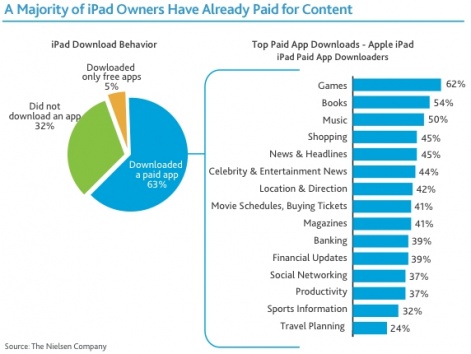 As such, Nielsen's claim that owners have a prevalance for

print and video on their iPads  reading books and magazines or watching films and video rating higher on iPad than they do on iPhone  is hardly surprising.

The device is certainly a more natural fit, quite literally, for various forms of media than either iPhone or iPod touch. 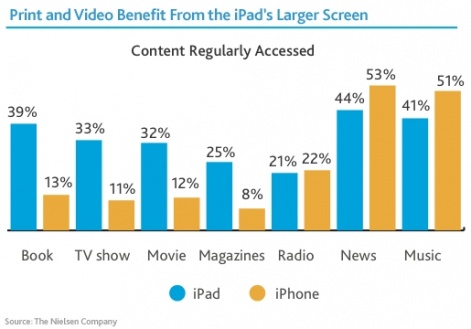 The importance of these results, Nielsen claims, will be felt at Christmas.

Smartphones and tablets are expected to be the one area that enjoy strong growth, making the ability for developers to pitch the right apps at them especially crucial.

You can see the report in full over on Nielsen's website.