iOS devices more attractive to US kids than dedicated consoles

November 23rd, 2010 - 01:14pm
By Richard Brown
According to new statistics revealed by the research firm Nielsen, American children are more interested in purchasing an iOS device over the coming six months than either a home or portable console.

After surveying a general population sample of US kids aged 6-12 on the next piece of consumer electronics kit they crave, the iPad topped the wish list with 31 percent interest.

Tied for second on 29 percent behind Apples market-swallowing tablet came its pocket friendly cousin the iPod touch and the traditional PC.

In spite of Nintendos existing line of handhelds trailing the two iOS devices with 25 percent interest in a future purchase of the DS / DS Lite / DSi, there is some positive feedback from this research for the Japanese gaming giant.

Demand for its upcoming 3DS among the young gamers surveyed (at 20 per cent) already surpasses the lust for Sonys PSP, Move, and Microsofts Xbox 360.

And whilst the Kinect for Xbox 360 peripheral didnt garner too much interest, its worth noting that Nielsens findings were gathered before Microsofts blitz marketing campaign for its motion-sensing controller kicked off.

Given the continued pressure on consumer spending, commented Nielsen on its blog, it is difficult to know how robust a holiday season this will be for tech devices, but this survey suggests the electronics aisle will be heavily traveled this season. 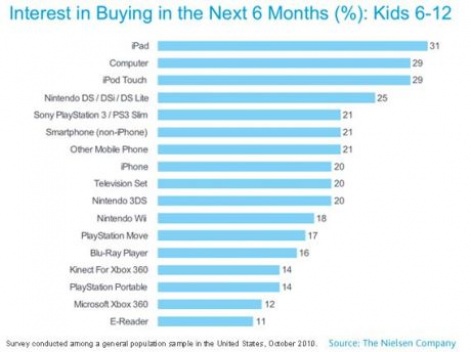