Have your say on the mobile games business in the PocketGamer.biz 2010 trends survey 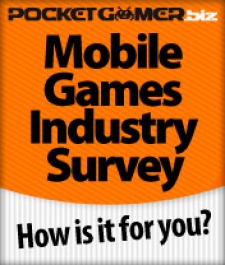 Aside from the continual march of both iOS and Android, we've witnessed the birth of some genuine mainstream hits in Angry Birds, a veritable explosion of freemium content, the arrival of a host of new viable formats from the iPad to Windows Phone 7 and a spate of high-profile acquisitions headlined by ngmoco (DeNA), Chillingo (EA) and Newtoy (Zynga),

All in all then it's been a year of tremendous opportunity and for some the realisation of considerable wealth, but how was it for you?

We at PocketGamer.biz are looking for developers in the mobile games market to give us their views on how the year has treated their business, changed their setup and altered their expectations of the future.

The survey will take just 10 minutes to fill in and is entirely anonymous, so no company secrets will be leaked and only aggregate percentages will be published.

As a thanks for their contribution not only will we mail all developers who complete the survey an early copy of the results before publication, but we'll also offer them a 10 percent discount off the next edition of the Mobile Games Trends Report (due to hit the streets at the end of January 2011).

To enter the survey now, just click this link.