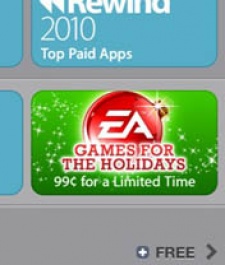 December 17th, 2010 - 09:02pm
By Jon Jordan, Contributing Editor
In the midst of the debate about EA's 99c App Store assault, one important viewpoint has been overlooked.

In other words, what would Steve Jobs do?

Personalisation aside, it's a valid question. When the biggest mobile publisher in the West cuts the price on most of its iOS back catalog, you'd think Apple would have an opinion.

And that view has been made clear with the platform holder running banner ads on iTunes promoting EA's Games For The Holidays price cut.

It's led to murmurings from the developer community, some of whom are unhappy with Apple 'officially sanctioning' EA exercising its publishing muscle in such a blatant manner.

Others are happy thinking that with more people checking out the App Store because of the sale, a riding tide will float everyone's boat.

Still, the vital - and as yet unanswered question - concerns whether Apple will lock down the App Store charts for five days when it freeze iTunes Connect on December 23.

And whether EA will magically increase the price on all its games prior to that, effectively converting the chart position for its 99c sale titles for the next five days to games now costing anything from $3 to $7, just as millions of new iOS devices are given as presents.

If so, expect such 'official sanction' to result in serious backlash from developers who are already planning on exploring new platforms such as Android and Windows Phone 7 in 2011.