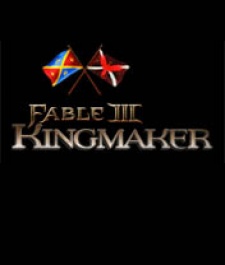 January 11th, 2011 - 04:25pm
By Keith Andrew
Three months since it made its debut, Microsoft's Fable III companion/promotion game Kingmaker has called a ceasefire, with more than 3.5 million flags planted by users across the course of the battle.

The app, which was launched in Europe on iPhone, Android, Symbian and Windows Phone 7, charged players with planting flags in the real world in a Foursquare-style exercise.

The idea was to win territory for either the Royals or Rebels, gold coins awarded for use, which could be transferred into main Fable game in the process. Five billion coins were awarded, while the Rebels beat the Royals 5-2.

Though its impact on physical sales of Fable III on Xbox 360 is unknown  estimates put its current worldwide sales at just below 3 million  the app rallied success in its own right.

Within days of launch, Microsoft revealed Kingmaker had enjoyed 50,000 sign ups, with 1 million flags having been planted by mid-October.

Since then, flag placements have more than tripled, numbers averaging out at more than 26,000 flags placed a day.

Next up for the Fable franchise is another mobile tie-in, this time in the form of Fable: Coin Golf for Windows Phone 7 (no, seriously).