Doodlegate: 'I've been advised not to respond, I must' - Igor Pusenjak sets the record straight, withdraws App Store Doodle restriction 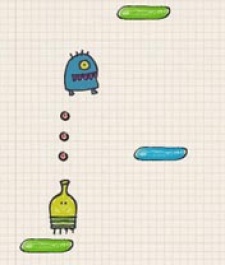 January 12th, 2011 - 11:25pm
By Jon Jordan, Contributing Editor
As I first wrote a couple of days ago; "Trademarks are one of those issues that by definition are highly legal and hence not well understood by the general public.

"It's a context that makes the news that Doodle Jump developer Lima Sky has been sending out warnings, via Apple, to those studios who have released games on the App Store with Doodle in the title, a tricky one to call."

Two days on, I see no reason to retract that statement.

In fact, it's even more complicated than I first thought.

This is because of the way US trademark law works - something doesn't mesh well with the game development process.

It's good therefore that Igor Pusenjak, the co-founder of Doodle Jump developer Lima Sky, has posted a long statement - see below - explaining the situation.

As anyone who's ever met Igor knows, he's an honest and likeable indie developer - albeit now a rather successful one - but not someone to troll IP law: only someone who's developed a game that's sold many millions of copies and is trying to tread a line and protect his future livelihood in terms of intellectual property law as it currently stands.

As he confesses, the issue about getting developers who have released games that use the term 'Doodle' in their title was overreached and has been called off.

At this point, the situation gets really complex as it seems there are completing trademark applications over the term 'Doodle'.

Anyhow, the conclusion is a win-win. All Doodle games on the App Store are safe, and everyone has learnt something about IP law.

Here comes the meat. Lima Sky's statement, from Igor Pusenjak, is as follows:

"Although my lawyer has advised me not to respond to the attacks on Lima Sky and Doodle Jump since our notice, I must.

First, I've instructed my lawyer to contact Apple today to withdraw the notice. That notice was sent out largely to protect our Doodle Jump trademark from threats of being canceled by Bryan Duke's big-house law firm.

One of their arguments for threatening to cancel our registered Doodle Jump trademark was that we did not prevent other games from using the word 'Doodle'.

The notice overreached in asking Apple to remove the games and named some games that probably should not have been singled out.

There was absolutely no rush to call a game "Doodle Something" until Doodle Jump became famous. Then many developers began jumping on the bandwagon whether their game had any doodled elements in it or not. They were simply trading on the fame of Doodle Jump, for which Lima Sky has a trademark.

Under the law, like it or not (and we don't like it), we are required to ask those developers to stop using a name similar to our trademarks, whether the infringer is a little guy or a big guy.

Accelerato's Bryan Duke, and many of you, are ridiculing me for attempting to trademark the word "Doodle." But such is trademark law. Apple has a trademark on a name of a fruit (Apple); a number of companies have trademarks on the word "Memory;" and Facebook is asking for a trademark on "Face."

Yeah, when you think about it, it sounds crazy. But if you actually read something about trademark law it starts to make some sense. It doesn't mean you cannot say "apple" or "memory" or "face", or that we don't want you to say or use the word "doodle", or doodled graphics in your game(s). It is there to protect companies from customer confusion and from having people make knock-offs.

We originally named our character The Doodler, but so many people started calling him just simply "Doodle" that we decided to officially name him Doodle the Doodler, or just Doodle for short. We applied for a trademark on the word "Doodle" in part as a defensive maneuver after we learned that Duke has applied for a trademark for the word "Doodle" and were afraid he was going to use that against us.

At the end of the day, I am a game developer, just like many of you. I want to spend my days creating great games, and not dealing with the legal issues.

I have personally been speaking at numerous game developers conferences, sharing the secrets behind the success of Doodle Jump with all the indie devs in the audience. We have also helped and promoted quite a few indie games through Doodle Jump and Lima Sky communities.

It saddens me that so many of you were so quick to jump to conclusions based on incomplete and incorrectly reported information, and without even hearing the other side of the story."

Reply
Jason Ramsay
Just wondering... If all successful game companies trademark the words they use in their games, we might need to invent new English words.
Posted 9 years, 6 months ago

Reply
Jason Ramsay
I need to trademark the words "Game" and "Play". I don't want anyone else using those words in any game because they need to be exclusively mine. How do I go about it?
Posted 9 years, 6 months ago

Reply
Attila Beke 3D Magic Kft.
Still not buying, sorry.
You ruined your reputation dear Igor. I hope, other devs will learn from your mistake.
Posted 11 years ago