Symbian in second on 31 million

February 1st, 2011 - 01:01pm
By Keith Andrew
It's a surprise to most people that, despite disparaging headlines surrounding the OS over the course of the last year, Symbian managed to remain the world's largest smartphone platform according to most available data.

Until now, that is.

Numbers published by analytics firm Canalys for Q4 2010 suggest that, for the first time, shipments of Android handsets outpaced those of Symbian.

Android on the up

Throughout the quarter, 32.9 million Android smartphones were shipped to market, compared to 31 million Symbian handsets.

Nokia remains the world's leading smartphone vendor, given Android is spread across several OEMs, but Canalys claims it's Google's OS that is now effectively leading the charge. 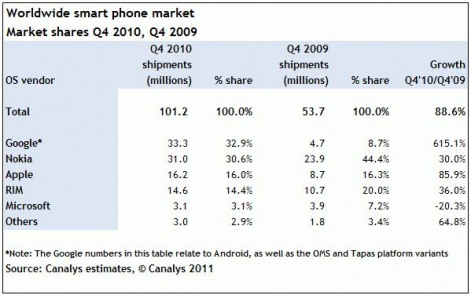 "After a difficult 2009, the speed with which the market has recovered has required real commitment and innovation from vendors and they have risen to the challenge.

"But vendors cannot afford to be complacent. 2011 is set to be a highly competitive year with vendors looking to use new technology, such as dual-core processors, NFC and 3D displays, to differentiate their products and maintain value."

Canalys claims the performance of Android vendors was up across the board  LG, in particular, saw volumes grow 4,127 percent in Q4 2010. Android as a whole grew by more than 615 percent year on year.

In terms of OEMs, Nokia held on to its typically strong position in Europe, the Middle East and Africa.

BlackBerry handsets proved most popular in the US, however, with Canalys claiming RIM regained the regional top spot from rival Apple thanks to what it labels iPhone's typical seasonal dip.

HTC took third spot in the US  the highest placed Android vendor  though Canalys noted its support for Windows Phone 7 had also given its shipments a boost.