February 1st, 2011 - 04:24pm
By Keith Andrew
You might think that getting consumers to download your app in the first place is the main challenge developers face, but according to stats released by mobile app analytics firm Localytics, that's often only half the battle.

Having pooled data from apps on iOS, Android, BlackBerry and Windows Phone 7 throughout 2010, the firm's numbers suggest more than a quarter of apps downloaded across the course of the year were removed from the device after being started up just once.

Though it's unclear just why, it's a trend that built throughout the year, with so-called 'one time apps' growing TO account for 28 percent of the app market in Q4 2010  though the firm does conclude that some of the apps downloaded in the last quarter may have been used again in January. 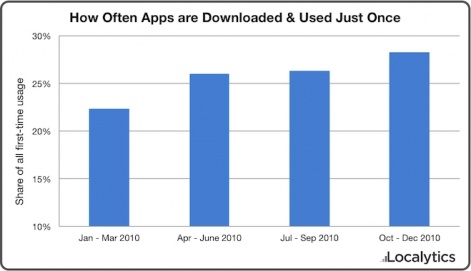 On the flip side, Localytics notes that this means almost three quarters of all apps are used more than once.

"Having 74 percent of new customers go on to use your app at least once more is pretty encouraging," the firm states in a blog post.

"Therefore, in order to build a profitable business in this hyper-competitive market, publishers need to understand who their loyal users are and how to continue growing a loyal user base."