The latest news on the new Xperia range, including, we suspect the new one with game controls 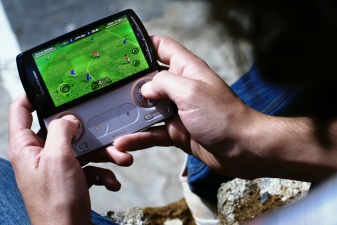 February 13th, 2011 - 05:25pm
By Chris James, CEO
At today's pre-Mobile World Congress event in Barcelona Sony Ericsson are due to release the final details of their worst kept secret, the Xperia Play. We're here (along with like 300 other press) to report.

The 5 minute countdown is sounded, meanwhile we're enjoying a leisurely drink with the Gamehouse guys who are going off to the Espanol Madrid match later...no invites for us, swines!

Three minutes to go and a hush descends, there's an air of palpable excitment, or maybe it's just the free vino.

Just grabbed a Sony press stick, a little ahead of schedule, let's have a little look...hmm, lots of interesting images, I'll start uploading them now.

President is up first, a good year for Sony Ericsson, the year of 'back to black' with 10 million Android smartphones sold.

All about adding new Xperia phones this year, the Xperia Arc was very well received at CES, but tonight they're introducing new models (quelle surprise). First up it's the...

...Xperia Neo. Nope, not a belated Matrix branded smartphone, it's all about creating a high quality yet affordable camera-based smartphone. Tony is showing us more now about the new OS tweaks and browsing high quality images through the HDMI connection.

Judging by my press-pack, I'm guessing that the Sony Ericsson Pro will be next up, followed by the Play, still looking for specs.

While I uploaded some images of all 3 new phones, the chaps on stage have moved onto the Xperia Pro, a new Android handset for connected consumers who love their mail and messaging.

At last! They are finally going to announce this. Since the start of the joint venture people within the company have been dreaming of this product and now we get to see it ad play with it for real. Ladies and Gentlemen...we give you the Xperia play!

Built on Android Gingerbread it can do everything you'd expect from an Xperia phone, but the first ever to offer immersive gaming that's been certified by Sony Playstation.

Chief Creative Officer is up on the stage now and he's happy (he looks it too!). This is the proudest moment of his 10 year career at Sony Ericsson. He explains why it hasn't been possible before (cough - N-Gage!), that it needs a proper ecosystem and cutting edge innovative technology....

... the brief with Xperia was always to deliver the most entertaining smartphones, and they've delivered on that with the new line-up, specifically the Play...

Enough already, we get that you're proud, let's get into the specs!

Right then, we've got a big cheese from Sony up on stage now, talking about the Android-based Playstation Suite and confirming that Xperia Play will be the first device to feature this. The store won't be properly up till later in the year, but the Xperia play will come with a classic PS1 title and a growing catalogue of classic games will be made available exclusively to the Xperia play...and much more to come!

Next up a little more detail.

We're having a quick rundown now with a creative double act, focusing first on the 'smartphone credentials', but fortunately they quickly crack on with flipping out the controls with the familiar Playstation icons and showing some games....

So what games can you play on this device?

There's loads, they're rich and entertaining...hmm, maybe a little light on detail there. Console games coming to Android from Sony Entertainment plus high-quality Android titles, obviously the key factor here is the backing of the games industry.

Aside from Sony themselves, there's around 20 publishers and 50 titles available for launch, with that number increasing all the time.

A couple of call outs, Peter Parmenter from EA, Gonzague de Vallois from Gameloft and Michael Breslin from Glu mobile.

The line-up will include Battlefield, Dead Space, Guitar Hero plus FiFA (first multiplayer on smartphone), Galaxy on Fire (tweaked for Experia) and Polarbit's racing title Reckless Racing (with extra levels). Obviously being an Android ecosystem there are other publishers out there Dungeon Defender Wave 2 (exclusively on Xperia Play).

Now there's a shout-out to Brett Sayler and Unity Technologies who'll be ensuring a continual flow of premium content, they've integrated features from Xperia Play as part of their technology - the first time that Unity partnered with a smartphone platform. Wow!

And the phone will be out....in March!

What's more, first up it'll be hitting the US and exclusively with Verizon in the spring.

And that's the end...more stories and specs (and pics to come!)

MWC 2011: Angry Birds and Zum Zum come out on top in GSMA Awards