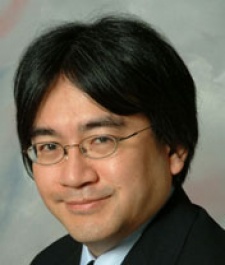 Separated by only 800 yards in San Francisco, the two corporation chiefs couldn't have been further apart in outlooks, with Jobs naturally bullish about the 'Year of the iPad 2' and Iwata bemoaning the state of game development.

At the conclusion of his keynote speech, Iwata expressed three concerns about the industry, the most notable of which was that "game development is drowning".

Whereas in 2005, much of the assembled audience at the Game Developers Conference were committed to consoles and handhelds, the majority of professionals in attendance today, Iwata remarked, were more likely working on mobile games.

This seachange in commitment makes the Nintendo boss fearful of the future: "These (mobile) platforms have no motivation to maintain the value of the gaming."

"Quantity is how they profit. The value of software does not matter to them."

Though this particular jab wasn't aimed squarely at Apple - with the smartphone gaming market overall the intended target - the prominence of Jobs's App Store and its bite-sized, low-price alternatives give Iwata most cause for concern.

According to research from Forbes, Iwata noted, 92 percent of mobile app downloads are free, conjecturing that "in the oceanic smartphone games market, the chance to be visible - and the opportunity to make a living - is remarkably low."

"With so many consoles to publish games on, it is already so hard to attain visibility and status."

And so after questioning whether the cream can continue to rise to the top in the overcrowded gaming world, president Iwata queried the dedication to producing stellar titles:

"Is maintaining high-quality games a top priority, or not? Without content, there is no industry."

A rallying call or a desperate plea? With 3DS set to launch on the same day as iPad 2 in the UK - March 25 both firm's D-Day - it won't be long before we know either way.