48 apps already on board

March 17th, 2011 - 03:16pm
By Keith Andrew
Given Amazon has already snapped up the exclusive rights to Angry Birds Rio on Android, there's every chance the launch of the firm's Appstore will attract plenty of consumers.

German site AndroidNews.de has managed to get a sneak peak at the marketplace before its roll out, however, simply by guessing the store's URL  www.amazon.com/apps.

Since removed, the portal was up long enough for the site to check it out, revealing that it boasted 48 titles.

As detailed by CNET, much attention was initially placed on an icon for Call of Duty: Modern Warfare: Force Recon, though a little detective work suggests that's likely a port of Glu's 2009 release by the same name, which picked up a silver award from Pocket Gamer at the time.

More significant, however, is the observation that the majority of Amazon Appstore's prices undercut their Android Market equivalents by between 20c and 50c.

This is interesting because as part of its terms and conditions, and within certain limits, Amazon has a right to price games as it wants, no matter what developers think.

Of course, were Google to respond in kind, it could set off a mini price war  a somewhat unnerving side effect, given Android Market is already one of the cheapest marketplaces around. 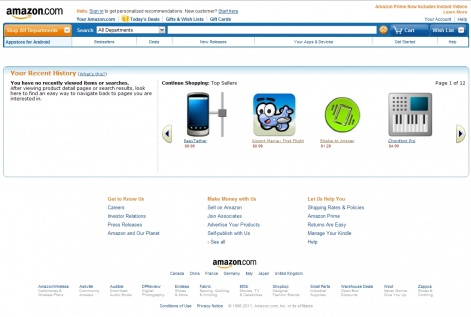