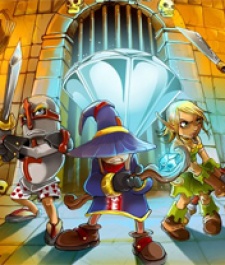 April 1st, 2011 - 05:26pm
By Keith Andrew
The current thirst for freemium releases meant it was only a matter of time before games equipped with in-app billing finally started to roll out on Android Market.

Google officially launched its new in-app purchase system for the marketplace on March 29th, and it appears Trendy Entertainment's Dungeon Defenders: First Wave could - fuinnily enough - well be in the first wave of games to support the feature.

The game, which previously retailed for $4.99, has now gone free on Android Market, with the developer claiming the ability to buy pets, armour, equipment, and various other items will keep it monetised.

"Android Markets in-app billing is a huge way for developers to provide content to gamers and Trendy is thrilled to celebrate this new feature by offering Dungeon Defenders: First Wave for free to Android devices," said development director Jeremy Stieglitz.

Interestingly though, it's still listed at $4.99 on Amazon's Appstore for Android.

Following up in quick fashion is Com2uS's 9 Innings: Pro Baseball, which has also launched as a free release on Android Market.

"9 Innings 2011 has also adopted the newly released Android's in-app billing for collecting player cards to strengthen your favourite team," the publisher said in a statement.

It remains to be seen whether in-app purchases will prove as popular on Android Market as they have on iOS, though a recent study by Distimo suggests 29 percent of the revenue from the top 100 apps in the UK is already generated by freemium releases.