April 13th, 2011 - 05:23pm
By Keith Andrew
Sony Ericsson's move to implement its official app channel on Android Market for its devices is a great demonstration of how the openness of Google's platform can be used for commercial ends.

It also open up the cries of fragmentation however. Some users seem less than pleased; in doing so, the firm has relegated the My Apps option to the phone's menu key, adding an additional button press to accessing the list.

"We're the first mobile phone manufacturer to do this and Im really excited to see what we will be able to use it for. It is an operator dependant feature though so it will not be there for all of you but most of you will get it."

At present, the channel seems to push Sony Ericsson commissioned apps almost exclusively, though Skogberg claims other games and apps will feature from time to time, aiding studios gain visibility.

However, by forcing users to use the menu key to access their apps, Sony Ericsson has generated some negative reaction.

"It's already annoying. How do I opt of out this?" says one comment on the blog, imploring the firm to "Consult with your customers before doing things like this in the future."

One other describes the move as "presumptive" and "arrogant".

"I agree it would be better to have it as an extra function on the menu or if possible on the screen, but not to replace a defined feature. You do need to ask customers what they want, I think." 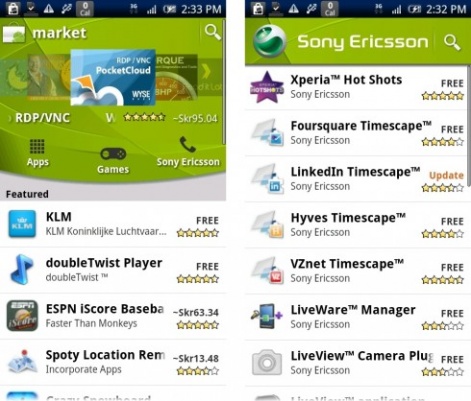