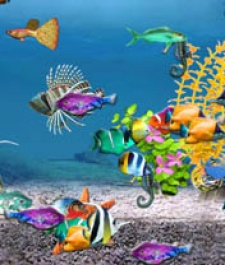 April 19th, 2011 - 08:53pm
By Keith Andrew
It's now assumed that successful iOS releases will attempt to mirror their performance on Android.

Gameview's Tap Fish, which has already enjoyed 10 million downloads on the App Store, has just made the leap to Android Market.

And 18 days since launch, the firm claims installs are already over the 500,000 mark.

"Consumers have clearly embraced it, and there are several key distribution and monetisation opportunities that make it very appealing to us as developers.

"But the biggest reason we ported Tap Fish over to Android was the sheer volume of requests we got from consumers who had seen the game on their friends' iPhones or heard about it online and simply had to have it for their Android devices."

Such demand has lead to Tap Fish topping the free casual games charts and hitting the number five spot in the overall free games run down.

More impressive perhaps, the seven day retention rate for the Android version is over 85 percent, with users logging on more than three times a day and collectively registering 1 million visits to neighbour's tanks.