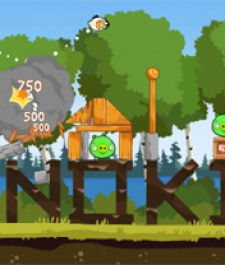 April 21st, 2011 - 10:19am
By Richard Brown
So, you thought that after spreading its wings with Facebook gaming, plush toys, an animated series, and a motion picture tie-in, Angry Birds would just call time and fly off into the sunset?

The Mighty Eagle and the rest of the Rovio flock have been busy integrating potentially one of the biggest developments in smartphone tech NFC into their omnipotent physics-based puzzler.

At a keynote presentation on gaming and social media at the WIMA NFC conference, Angry Birds Free with Magic was hatched, with Rovio confirming a full version is in the works.

What separates Angry Birds Free with Magic from previous editions in the series is the community aspect, whereby 15 (of the titles 20) levels are unlocked when you touch phones with someone else.

Someone else with an NFC-enabled Nokia smartphone, of course.

"With Angry Birds Magic, friends can group together to combat the pig menace, in a new take on the game that so many people all over the world have fallen love with," Mikael Hed, Rovios CEO, said.

A range of Nokia handsets will embed NFC in their architecture in 2011, and, as part of the Symbian Anna update, Angry Birds Free with Magic will come preinstalled on Nokia's C7.

Bryan Biniak, head of Ovi Publish, Nokia, explained: "Angry Birds Magic is a great demonstration of NFC technology and were delighted to have it exclusive to Nokia.

"It represents an exciting opportunity for developers to create new, innovative apps and games."

And if you cant find any friends with an NFC-equipped device, you can always uncover extra levels in Angry Birds Free with Magic via another route: NFC tags dotted around at strategic locations.

It'll be interesting to see if the combination of this mobile gaming phenomenon and the world's largest cell phone manufacturer spurs greater immediate interest in the contactless technology, given it's only built into Googles Nexus S and the Samsung Galaxy S II at present.