May 12th, 2011 - 11:25am
By Keith Andrew
Instead of launching a host of party poppers and waking up the next day with a sore head, Google has decided to celebrate the news that Android Market's library of apps is now 200,000 strong by indulging in something far more practical: a complete redesign.

The refresh is pitched as an attempt to make app discovery far easier for consumers, helping installations move swiftly on from the 4.5 billion registered to date.

As well as a fresh look for the web version  including a new 'trending' section, displaying apps growing from daily installs - the phone client has also been updated with a host of new features.

Firstly, Google has revamped its ranking systems so they're location specific, as well as adding new free, paid and top grossing lists to the Android Market home page.

Even more interestingly, the firm has unveiled a new 'editor's choice' section designed to showcase what Android staff believe are currently the best releases on the platform. 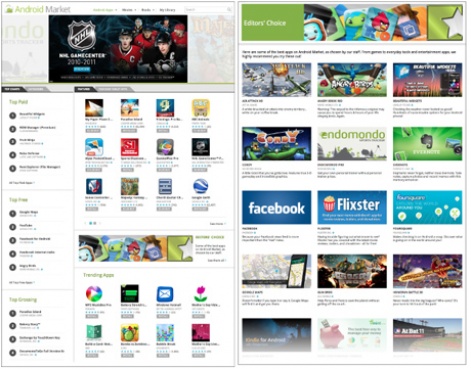 Developers who offer up apps of a consistently high quality can also be awarded badges designed to highlight their aptitude. An initial band of 150 developers have already been inducted into this select club.

Finally, each app page on Android Market now features 'related apps'  i.e. either those browsed by users who installed the app in question, or those that tend to be installed alongside.

"Whether youre looking for the most popular apps, hot new apps, or just the very best apps available, we want to help make sure that you find what you're looking for," said Android Market product manager Fernando Delgado.

The redesign forms one part of a whole host of changes to Google's Android business, announced during the firm's I/O conference in San Francisco. The new web version is available right now, with the update to the Android Market client on handsets "coming soon".