Selected in conjunction with Pocket Gamer and OpenFeint 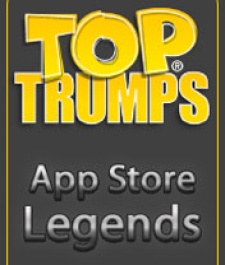 June 14th, 2011 - 03:38am
By Jon Jordan, Contributing Editor
There are plenty of metrics for working out which are the best iPhone games ever.

But there's little doubt the new App Store Legends deck for the Connect2Media-published and Mobile Pie-developed Top Trumps iPhone game is going to be pretty cool.

Selected in conjunction with Pocket Gamer and OpenFeint, the deck - which will be one of two free decks available with the game (there will also be premium collections such as James Bond and NBA) - will list 30 legendary iPhone games.

As with all Top Trumps decks, you'll be using each card's characteristics such as release date, number of updates, user rating and top 10 successes to try top win all your opponents cards.

But what should these 30 games be, we hear you cry?

Well, we've got our list of the best of the best, but if any developers thinks they have an iPhone game that deserves inclusion, now's the time to let us know.

You can contact me at jon[at]pocketgamer[dot]co[dot]uk with your reasons.

And if further encouragement was required, studios who have a game included in the deck will receive a very limited edition physical version of the App Store Legends pack too.