With cumulative revenue of over $1.5 billion, Zynga's doing okay, but doesn't match DeNA or GREE for profits

July 4th, 2011 - 01:17am
By Jon Jordan, Contributing Editor
With Zynga finally filing for IPO, looking to raise $1 billion in the process, a flood of information has been released via its Form S-1.

This is legally required by the US SEC so potential investors can understand the company's business, and hence it has to reveal its financial data.

How much is mucho?

This aspect provided the headline data with respect to turnover: cumulatively, the company has generated over $1.5 billion in revenue since it launched in 2007.

In comparison, over the same quarterly period, pure mobile Japanese competitors DeNA posted net sales of $393 million, while GREE had sales of $198 million, both on the back of much smaller user bases.

Zynga has more than 60 million global daily active users, while the Japanese companies say they have less than 30 million subscribers apiece.

For Q1 FY11, the company made net income of $11.8 million, and ended the quarter with cash, cash equivalents and marketable securities of $996 million, mainly thanks to its many pre-IPO investor rounds.

It currently has 2,268 full-time employees. 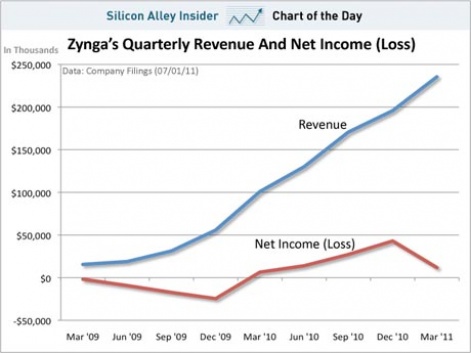 For the same period however, GREE had net quarterly income of $99 million, while DeNA booked $114 million of income, demonstrating - even in a somewhat apples to pears comparison - as mobile platforms they are much more profitable than Zynga, which relies on Facebook for the majority of its business.

Zynga launches a $25 million fund for educational and charitable purposes