$1 market is an illusion

July 25th, 2011 - 07:31pm
By Keith Andrew
It was a long time before the likes of Nintendo and Sony would acknowledge smartphones were a threat to their respective businesses.

Now, if Flurry's numbers are to be believed, their understanding of the market is proved to be entirely out of whack, owing to the rise of the freemium model.

As the firm points out in its latest blog entry, both Nintendo president and CEO Satoru Iwata and Wedbush Morgan analyst Michael Pachter have made reference to the rise of the $1 app  and, in Iwata's case, their supposed lack of quality  but successful freemium games are making far more than a dollar a purchase.

In fact, Flurry's numbers put the average in-app purchase transaction at $14, suggesting mobile studios are generating far more revenue than Nintendo and the like would believe.

That's largely because, according to Flurry's research, a consumer's IAP decisions are determined by the amount they wish to spend.

Rather, they merely decide whether they're invested enough in play to make any purchases at all. If the answer is yes, the flood gates open.

"Our data shows that around 3 percent of consumers will spend money in freemium games," says Flurry's general manager of games Jeferson Valadares.

"Those who make a decision to spend, however, appear to be deeply committed to the game experience, and therefore spend large amounts."

The other reason the average is so high is because expensive purchases make up the majority of freemium revenue.

While transactions over $20 make up just 13 percent of the total, they generate 51 percent of all revenue. 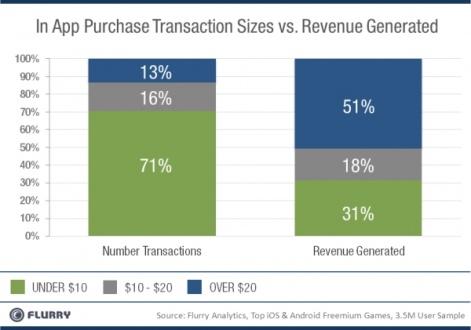 "Among all purchase price points, over 5 percent of all purchases are for amounts greater than $50, which rivals the amount paid at retail for top console and PC games," adds Valadares.

"In fact, further breaking down the 'over $20' category, 30 percent of the total revenue is generated from transaction sizes of over $50."

Valadares concludes that, owing to the rise of freemium, total US iOS and Android game revenue will surpass $1 billion by the end of 2011.

"The freemium business model on mobile, enabled by a device that is always with consumers, and always connected, is unlocking profound new ways to deliver value and extract revenue from consumers, and for far more than just $1 at a time."

Of course, it's analysis that chimes with many freemium developers, most recently explained by Flower Garden creator Noel Llopis at the Develop conference. He argues '0.5% of your users can drive 80% of profits'.