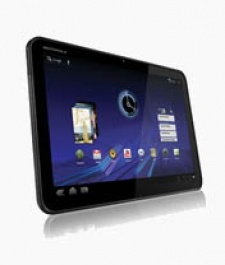 August 10th, 2011 - 02:56pm
By Keith Andrew
If taking Samsung to task over the design of its Galaxy Tab 10.1 wasn't enough, it appears Apple is also suing Motorola, claiming its Xoom tablet apes iPad all too closely.

The revelation was discovered by IP activist Florian Mueller, who states the detail of the firm's action against Motorola is hidden within the filings of Apple's case against Samsung in Germany.

"That passage says that Apple filed with the same court (district court of Düsseldorf) a complaint over the design of the Motorola Xoom, but it doesn't state whether that complaint included a request for a preliminary injunction," says Mueller on Foss Patents.

"While it's not stated explicitly, I suppose that the complaint against Motorola also asks the court for an EU-wide injunction, but perhaps just for a permanent injunction without a previous preliminary one."

Both Apple and Motorola are already suing each other in the US over more than 40 separate patents.

Taking on the tablets

Another firm, JAY-tech, was also served a preliminary injunction that was upheld by the court, preventing plans for a presumably Android-based tablet hitting the market from the German firm.

What springs to mind, however, is where this goes next?

Samsung is already being forced to delay its Galaxy Tab 10.1 launch from all European markets bar the Netherlands owing to a preliminary injunction enforced by the same Düsseldorf court.

Presumably other tablets such as HP's TouchPad (which has specs largely identical to that of iPad) or Android Honeycomb offerings from Acer and Asus, could also be targets if Apple considers the very concept of a touchscreen tablet device to be protected property.