55.9% of Android owners still use Froyo, only 24.3% now running Gingerbread

August 10th, 2011 - 04:20pm
By Matt Sakuraoka-Gilman
Despite Gingerbread (Android 2.3) having been out in the wild for 9 months now, the majority of Android owners still run their devices on Froyo (2.2).

According to a recent survey posted on GetJar for the 14 days ending 1 August, Gingerbread (2.3) is being used by 24.3 percent of devices. Thats only a 3 percent rise since last months report. Its a far cry from Froyo (2.2) which currently runs on 55.9 percent of Android devices. 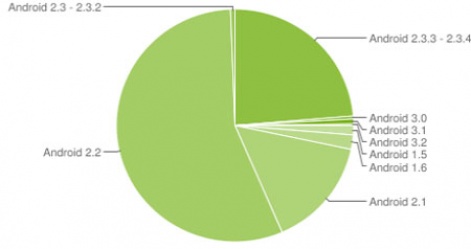 With the future Android OS, Ice Cream Sandwich, looming in the horizon, games developers would do well to heed the time its taking for newer OSes to become the standard. Working on the latest systems, and not supporting older OSes, may risk alienating the majority of the Android gaming community.

That said, hopefully, Ice Cream Sandwich may turn out to be a different prospect, as we recently heard at Googles I/O conference in San Francisco.

"We want one OS that runs everywhere ... We're investing heavily in the application framework ... and it will all be open source said Android Engineer Mike Claren.

You can see for yourself the piechart representing the overall use of Android OSes to the right.