"The introduction of the iPad has changed the face of mobile advertising," said Carsten Frien, CEO and co-founder of madvertise.

"Brands can now access target audiences anytime and everywhere and the introduction of new ad units means they can do so with a quality and range of advertising choices previously only available on desktops or laptops." 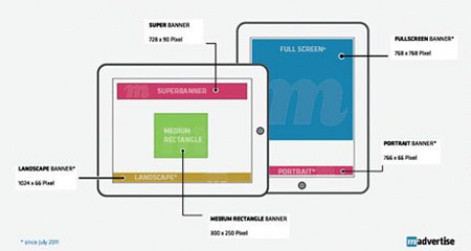 "We believe that both advertisers and publishers will benefit enormously from this move; more ad formats means more exposure and higher-impact campaigns, increasing CTR and generating greater direct response where relevant."

Madvertise, which opened offices in the UK, Spain and Italy in April, is the only ad network to offer location-based advertising in Germany.

It also has a 5 million developer fund in operation, meaning developers who use its service currently gain 100 percent of the advertising revenues.

Developers can find out more here.