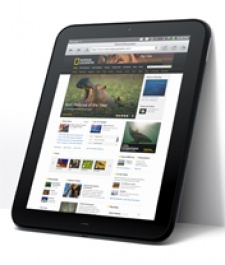 August 30th, 2011 - 04:22pm
By Keith Andrew
It's nowhere near a picture of health, but webOS's future might have received a boost thanks to two separate developments.

The first seems to be the last twitch of HP's corpse as it's confirmed it is to roll out an update for the platform over-the-air to "boost functionality".

It's the second major update delivered in this way since launch, but the first since HP announced it was dropping the device - good news for people who have recently picked up the tablets for $100 and might otherwise be considering loading them up with Android.

"We expect that HP TouchPad owners can look forward to an over-the-air update that will enhance the platform and add functionality and a growing applications catalog," HP said in a statement.

"HP is fully committed to the ongoing support and service of customers who purchased webOS devices. We plan to continue to investigate the best ways to leverage webOS software and grow the applications."

It seems a portion of that investigation might take the form of finding potential buyers for the platform.

Speculation suggests target number one is Samsung, with the Korean firm perhaps looking for another safety net following Google's acquisition of Motorola.

Digitimes claims Samsung considers the move for Motorola a threat to its position on Android, and is "considering purchasing webOS to compete head on against Apple and Google", though neither party has offered any comment, and the report seems fairly speculative at this stage.