Revealed as part of Oracle vs Google lawsuit

September 8th, 2011 - 01:44pm
By Matt Sakuraoka-Gilman
A Google internal policy presentation has been published, revealing a discussion about the advantages of giving certain companies, such as Motorola and Verizon, preferential status over the open source Android OS.

The presentation came to light after a judge presiding over the Oracle versus Google patent infringement case published it.

Florian Mueller of FOSS Patents has detailed the publication.

Titled "If we gave it away, how can we ensure we get to benefit from it?" the presentation details policies such as "Do not develop in the open. Instead, make source code available after innovation is complete."

The second bullet point of the presentation reads "lead device concept: Give early access to the software to partners who build and distribute devices to our specification (ie, Motorola and Verizon). They get a non-contractual time to market advantage and in return they align to our standard." 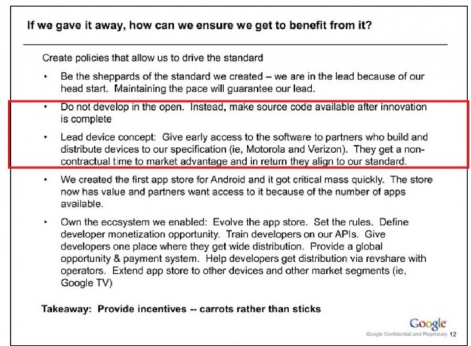 Mueller is in no doubt that these policies will damage Googles relationship with its other licensees.

"Can you imagine that a company like Samsung, HTC, LG or Sony could still trust Google in this regard if Google actually competes with them through a subsidiary [of Motorola Mobility]?" He said.

He added that it "removes whatever little doubt anyone had left that Google certainly plays favourites with certain Android OEMs, and if the MMI deal goes through, it will play favourites with only one: its own subsidiary, of course."

Indeed, as many commentators pointed out when the proposed Google acquisition of Motorola was announced, it would likely cause problems for licencees.

Since then, Samsung has released the second version of its bada OS, also highlighting its advantages over Android to developers.

Microsoft is also wooing OEMs and developers to its Window Phone OS.

It also seems that Anssi Vanjoki's (Nokia) prestigious statement that using Android was equivalent to pissing in your pants to keep warm, may be coming true, as licensees are finding that getting in bed with Google doesnt necessarily mean an equal relationship.

It also goes some way to answer the question "Does a company like Google spend $12.5 billion just to do a standard vanilla deal?", posed right here at Pocket Gamer.biz.