September 8th, 2011 - 06:24pm
By Jon Jordan, Contributing Editor
Crunching up the pay and play patterns generated by 20 million iOS and Android gamers across more than 1.4 billion sessions within freemium games that use its analytics SDK, Flurry has come up with some interesting conclusions.

Despite being the group with the most available time for gaming, 13 to 17 years olds are only the third most active even when it comes to time played.

More significant, they're terrible when it comes to paying for content, although this won't take into account other monetisation options such as ad or incentivised actions.

The 18 to 24 group is significantly better in terms of monetisation, but if you want to strike gold, you'll want to target the over 25s.

Specifically, 25 to 34 year olds account for a massive 49 percent of all cash spent in freemium games on IAP. 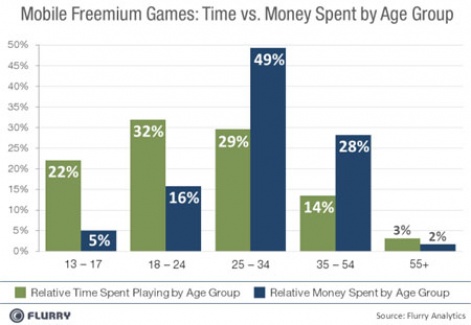 35 to 54 year olds are the best in terms of the density of hours played to amount spent on IAP however. They really can't be bothered when it comes to grinding.

Of course, it would be interesting to also get a breakdown in terms of gender, something Flurry says it's working on.

But, on this set of data, Flurry comments the "older group generates nearly four-fifths of all revenue in freemium games. In short, your whales may be older than you think.