Lemons are not the only fruit

September 9th, 2011 - 04:49pm
By Jon Jordan, Contributing Editor
Everyone seems to have an opinion about incentivised app downloads.

These range from hatred by Apple, which banned the practice on iOS, to measured neutrally from Google, and climax with those companies such as Tapjoy and W3i, which have built very successful businesses on the model.

Still, there's not been a lot of detailed analysis; a situation W3i is attempting to correct with its latest blog post.

It's entitled 'How understanding traffic quality proves incentivised traffic is more valuable than organic', and breaks down a campaign the company carried out for a game promoted on its system.

As can clearly been seen, the biggest traffic source boiled down to provide 6.22 percent of active users, while the second biggest source was the worst performing, being three times less effective.

The third largest traffic source was the best however, being 13 times more effective than the second biggest source. 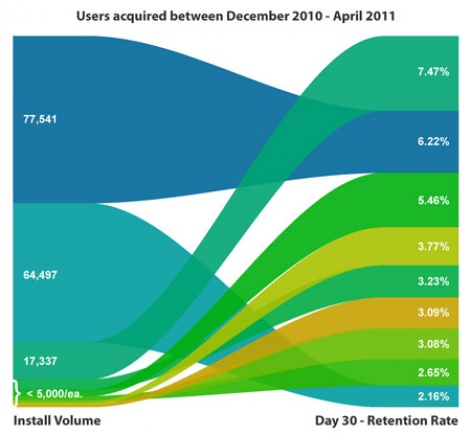 In addition to acquisition, W3i looked at the differences between average revenue per daily active user per source.

Of course, details such as the actual cost of acquisition make it difficult to take these numbers completely at face value, but nevertheless, W3i's conclusion that "not all traffic is the same when it comes to incentive installs", is clearly demonstrated.