Though only 80% are currently active

September 16th, 2011 - 12:55pm
By Matt Sakuraoka-Gilman
The million app milestone has been reached, though only via a combination of both iOS and Android apps and discounting the fact that 20 percent of the total are no longer active.

Personalised app store application Appsfire has added up the total number of apps since the conception of iOS and Android to reach the figure, finding that 52 percent of the million were iOS and 48 percent were Android-based.

Appsfire goes on to predict when the combination of iOS and Android apps will reach its next significant milestone, a total 1 million active apps.

By way of a handy graph, we can see that according to Appsfire the figure will be reached by the end of 2011, with Android predicted to account for just over 500,000 apps and iOS just over 550,000.

You can check the pie chart and graph below.

Earlier this month, Appsfire called upon developers to adopt its openUDID in response to Apple's decisions to deprecation UDIDs in iOS 5. 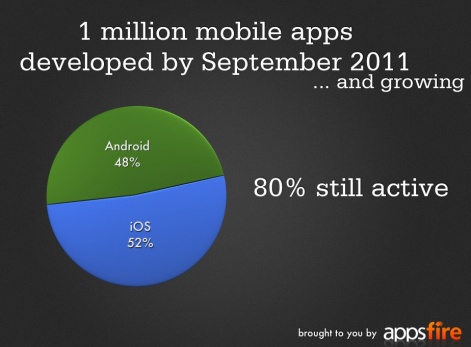