Samsung to pay out for every Android phone sold 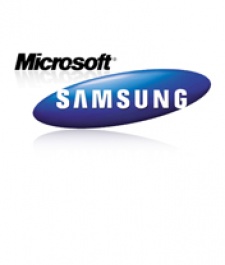 September 28th, 2011 - 06:10pm
By Keith Andrew
It might have only been a matter of hours since Microsoft and Samsung inked a cross-licensing patent agreement, but eager commentators are already pitching the move one of two ways.

For some, the new partnership between the two firms is a move by Samsung to protect itself in face of Apple's seemingly ceaseless patent attacks.

Samsung won't be able to utilise Microsoft's patents in any of the legal cases, but it will at least offer the firm security in the future.

Others, however, believe Apple isn't the trigger in all this. Instead, Samsung's move on Microsoft is a response to Google's proposed $12.5 billion buyout of Motorola  a sign the Korean giant is losing confidence in the stability of the OS as an open platform.

Either way, the deal between Microsoft and Samsung will unify both company's considerable patent portfolios, cross-licensing the libraries to one another and, crucially for Microsoft, ensuring Samsung pays the Redmond giant a fee for every Android handset it sells.

Yes, it seems for the time being, Microsoft will continue to earn more from Android than it does its own smartphone OS  the likes of HTC, for instance, already reportedly pays Microsoft $5 for every handset running Google's platform it shifts.

Interestingly, however, the two companies have also agreed to work together more closely on Windows Phone promotion, suggesting Microsoft isn't happy with the current earnings imbalance.

"Microsoft and Samsung see the opportunity for dramatic growth in Windows Phone and were investing to make that a reality," said Andy Lees, president of Microsoft's Windows Phone division.

"Microsoft believes in a model where all our partners can grow and profit based on our platform."

For it's part, as well as rolling out Mango on its existing Windows Phone handsets, the firm will also launch a new device designed for the new version of the OS this autumn.

"Through the cross-licensing of our respective patent portfolios, Samsung and Microsoft can continue to bring the latest innovations to the mobile industry," added executive VP of global product strategy at Samsung's mobile communication division, Dr. Won-Pyo Hong.

"We are pleased to build upon our long history of working together to open a new chapter of collaboration beginning with our Windows Phone 'Mango' launch this fall."