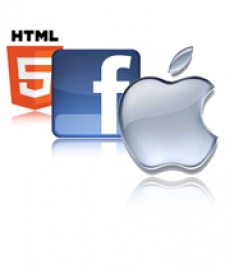 October 6th, 2011 - 02:49pm
By Jon Jordan, Contributing Editor
The most significant news arising from the proximity of Steve Jobs' death to the iPhone 4S launch has been raised by blogger Robert Scoble.

It had been expected - at least by some in the HTML5 community - that the Let's talk iPhone press conference would be the stage of a surprising rapprochement between Apple and Facebook.

Facebook's much vaunted Project Spartan platform was pulled from its recent F8 conference, and with iOS 5 being blazingly fast at running HTML5 according to developers, this announcement would have been the highlight of an otherwise disappointing launch.

And according to Scoble, that was the plan.

All about the context

"I didn't get why everyone in my network was telling me about the big things that were planned that didn't come out. Now we know," he says via Google+.

"Today a guy I know at Facebook told me that Apple just "went dark" this weekend and stopped answering emails and phone calls (they had amazing new iPhone and iPad apps and a new developer platform all ready for announcing).

"Folks inside Facebook thought they had done something massively wrong. No, they hadn't. Truth is you had something deeper to deal with."

That was also the reason the event 'only' lasted 97 minutes, instead of the usual 2 hours, and why there was no 'one more thing'.

Where this now leaves the proposed announcement is open to speculation.

iOS 5 will launch next week with iPhone 4S, while Facebook needs to get its platform live soon as developers will want to get the games they've been working on out before we're too deep into Halloween and Thanksgiving season.

GDC Online in Austin would have been a great opportunity, but starting 10 October, that's likely too tight a schedule.

Watch this space, in other words.