Following Compal deal, Microsoft's earning royalties on more than half of all Android devices

October 24th, 2011 - 01:05pm
By Keith Andrew
It'll do little to quell suggestions the firm makes more money from Google's OS than Windows Phone, but the unveiling of a patent agreement between Microsoft and Compal means at least 10 Android partners have now settled with the Redmond giant.

The latest deal will see Microsoft awarded royalties for all Android devices produced by the Taiwanese original design manufacturer (ODM), and crucially means firms responsible for more than half of all devices running Google platforms have entered into agreements with the company.

The specific financial details of the deal with Compal have not been disclosed, but it's unveiling comes on the back of a similar partnership announced with Samsung, which unified the two companies patent portfolios.

"We are pleased to have reached this agreement with Compal, one of the leaders in the original design manufacturing, or ODM, industry," said corporate VP and deputy general counsel for Microsoft's IP group, Horacio Gutierrez.

"Together with the license agreements signed in the past few months with Wistron and Quanta Computer, today's agreement with Compal means more than half of the worlds ODM industry for Android and Chrome devices is now under license to Microsofts patent portfolio." 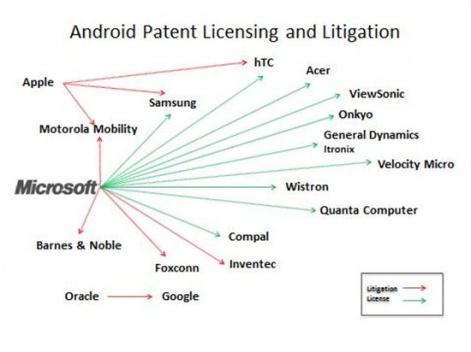 Elsewhere on the firm's TechNet blog, Microsoft claimed it prefers to sign agreements with firms licensing its patent portfolio rather than take legal action, claiming the company itself has spent $4.5 billion to license patents from other companies  a total of 1,133 agreements in all during the last decade.

In total, Microsoft now has patent agreements in place with 55 percent of the Android ODM market by revenue, and 53 percent of Android OEMs by units.