Nokia World 2011: Rovio's Vesterbacka: 'People congratulate me but for what? This is only a start.'

#NokiaWorld Digital publishing next for Rovio 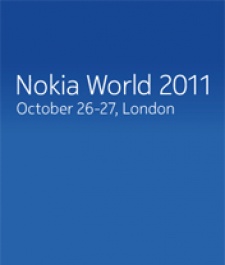 October 26th, 2011 - 03:18pm
By Jon Jordan, Contributing Editor
Games isn't a focus of Nokia World 2011, but there are plenty of game companies at the conference.

For example, EA, PopCap, Microsoft and Halfbrick are demoing their games on the new Nokia hardware - Lumia 800 and 710.

And, of course, no mobile conference is allowed to operate without the presence of Angry Birds.

And so it was that Peter 'Mighty Eagle' Vesterbacka, Rovio's CMO and spokesman turned up on the Rise of the Planets of the Apps panel.

Significantly, Rovio has just announced a version of the game will now be released on Nokia's feature phone Series 40 platform - including its new Asha series of touch and type devices.

The reason - of course - is that this is a massive volume market, which is something that's really important to Rovio as it starts to saturated the developed world.

"We are making the Angry Birds experience available to the world - India, Africa, emerging markets. We're really excited about that," said Vesterbacka.

"We've had 400 million downloads [of Angry Birds] and now we're looking for the next 400 million."

In keeping with this, Nokia has announced that of the 10 million app downloads it's getting from Ovi Store, around 30 percent are generated from Series 40 devices.

And, as a previous Nokia planelist explained, when it comes to emerging markets, it's not just about volumes, but it can also be about profit.

"The only thing you need to know about Africa is 315 million people are considered middle class," said John Waibochi of Virtual City.

More than a game

As for what's next for Rovio, Vesterbacka spoke about moving from the 1 million Angry Birds plushes the company's selling every month (10 million total) to its animated shorts, and now a cook book of egg recipes, which has already been launched in Finland.

"We'll be looking more at digital book publishing," he explained, adding, "A lot of people congratulate me but for what? This is only a start. We are building so much more than games. We are building an experience around Angry Birds.

"We love to surprise and delight our fans."

He also went on to talk about the potential for location in terms unlocking features; something Rovio has done with Barnes & Noble bookstore in the US.

"You don't have to check-in, just walk into the store to get special features in the game. It just works. I think as an industry, we're too focused on technology than our fans," Vesterbacka said.

"There aren't too many companies who focus on their fans."