The main driver of this record performance was what the company calls Paid Services Sales, which includes freemium games.

GREE is also pushing its advertising business, which is around 10 percent of sales. It says this is currently generating 5.6 billion impression per month in Japan.

GREE's worldwide subscriber total, which includes its main Japanese platform, plus US-based smartphone network OpenFeint, is now up to 155.4 million. 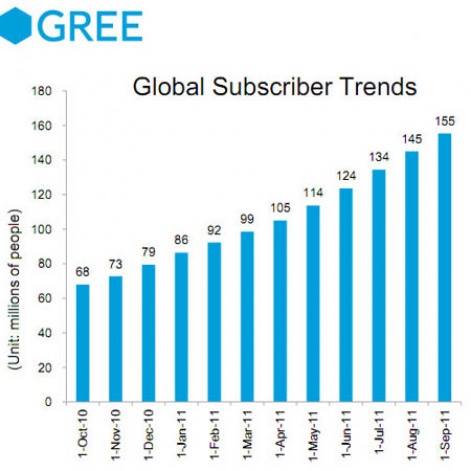 GREE also has a tentative claim over an additional 50 million users through its partnership with Singapore-based mig33 and 650 million in China through a deal with Tencent.

Looking forward, GREE has already restated its sales and income figures for FY12 by between 40 and 50 percent, suggesting it may have been lowballing previous estimates.

Growth will continue to come from Japan, with income from Europe, US and Asia so low that the company won't provide an estimate.

Combining with OpenFeint solid development tools, GREE says it will roll out a global mobile social gaming platform for all developers to support sometime in the second half of 2012.

It's also looking to release its first inhouse social games developed in the US and China, and further expand its developer and publishing network, with new offices in Holland and Brazil planned.

GREE ended the quarter with cash and cash equivalents of ¥20.9 billion (around $270 million), down 6 percent compared to the previous quarter due to the payment of dividends and income tax.

Another Eden and SINoALICE promotions push GREE revenues up to $190.6 million