December 27th, 2011 - 11:40pm
By Jon Jordan, Contributing Editor
With the Christmas period a regular peak in terms of new devices being opened and activated, it's no real surprise that 25 December 2011 witnessed the most new devices ever suddenly appearing into the ether.

However, according to Flurry, which tracks these via its analytics which are embedded into over 140,000 apps, compared to the average daily activation rate of around 1.5 million during the period 1 - 20 December, Christmas Day saw a massive jump of around 6.8 million devices activated.

Putting that into context, the total on Christmas Day 2010 was 2.8 million devices.

Less scientifically (as it relies on extrapolation over the entire app ecosystem), Flurry then calculated that these new devices - compared with the existing install base - downloaded 242 million apps on Christmas Day.

This compares to an average of 108 million per day for the period 1 - 20 December.

As Flurry points out, the percentage increase - 353 percent for devices compared to 125 percent for apps - is less because of the higher level of app downloads that are constantly occuring, whereas activation is a one-off action.

You can also get an idea how app downloads happened on a hour-by-hour basis from the following graph. 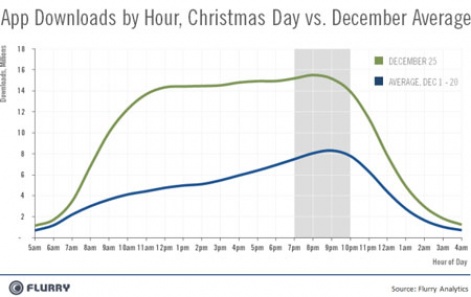 For the record, all time zones are normalised, meaning 7am in London is lined up with 7am in San Francisco etc.