What encouraged Christie, however, is the extent to which indies also benefit from the downloads derby iOS typically enjoys over the festive period, and  perhaps most importantly  just how long it lasts.

According to stats divulged by the outfit, the most interesting aspect of 2011's Christmas season was just how early downloads started to pick up.

"All developers expected a big spike on Christmas Day and the days following it, but what we didn't expect was to see sales start to see such a big rise in advance of Christmas Day," said Christie.

"And the tail from Boxing Day on was encouragingly long, taking about 2 weeks to get back to pre-Christmas sales levels." 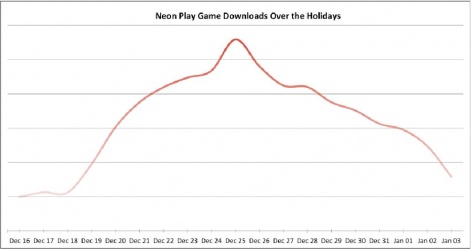 Presumably, downloads are boosted by existing owners having more free time on their hands as well as new owners making their first purchases on Christmas day itself.

Either way, Christie believes it's a healthy sign for the performance of indies overall.

"In terms of actual revenue, it increased 2-3 fold over that period," he added.

"I think we possibly expected or hoped for an even bigger Christmas Day spike, however we were chuffed with how the whole period went. Making Traffic Panic 3D free definitely helped increase awareness of our other apps."

He concluded, "It was also reassuring to see that our classic games like Flick Football and Paper Glider got the biggest spike, showing that people actually go looking for the ever-popular apps when they get their new devices."

Christie said Neon Play has "high hopes and expectations for 2012" with downloads about to pass the 30 million mark and the firm's latest iOS release - Paper Glider vs. Gnomes  due to go free on January 11.