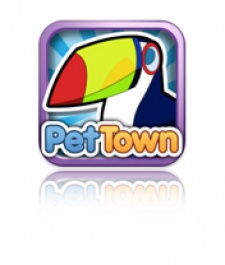 As popular as both MyTown and its successor have proved to be, Booyah CEO Jason Willig set himself a task of refocusing the studio's take on location-based play when he took charge back in October.

The end result of Willig's drive is Pet Town, which has just made it debut on the App Store and serves as a prime example of Booyah's focus on delivering "real world entertainment".

The game still touches base with many of the features users have come to expect from Booyah  like MyTown, city building is at the heart of play, with users having to piece together a world fit to play host to an array of cute and cuddly creatures.

However, its wider aim is to take Booyah as a whole into new territory. The idea is to set the company back on the path of growth with the launch of the first of what should prove to be a fresh batch of IP.

"It's exciting to see our creative teams deliver such a unique and innovative take on this popular style of play," said Willig.

Location remains Booyah's signature, however. It's already been suggested that future updates to Pet Town will allow players to take their animals into real world locations.

"Location isn't a means to an end or a feature set for us, it's at the core of every product that we build," he added.

"We plan on expanding our portfolio to take on various genres of real world games and continue to prove out our statement that where you play matters."

You can read the full interview with Cho  part of PG.biz's wider look at location-based apps  by clicking here.