January 24th, 2012 - 03:25pm
By Keith Andrew
If Android really is set to become the most important mobile platform for developers before the end of the year, those crossing from iOS might like to know just what they're getting involved in.

Stats revealed to PG.biz by UK studio Neon Play not only reveal that Apple's platform still makes up the majority of its downloads, but there's also a disconnect between the number of downloads Android amasses and how much revenue is drawn from them.

For the purpose of the comparison, Neon Play detailed both the download and revenue share from a total of four releases, but focused on two that launched on Android and iOS at roughly the same time -Traffic Panic 3D and Paper Glider Crazy Copter 3D.

Both games are free to play with revenue drawn from in-app purchases, although the latter did initially launch at 99c/69p on the App Store. 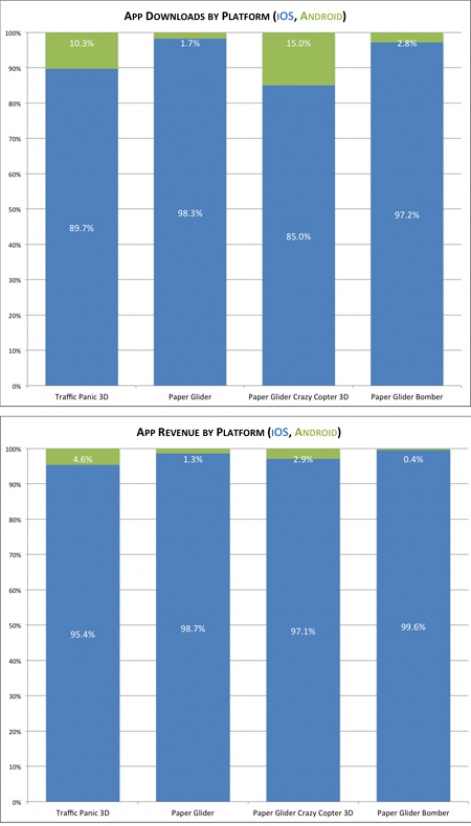 As the graphs illustrate, Android accounts for around 10 to 15 percent of downloads in the case of both releases, yet only amasses 5 to 7 percent of their revenue.

"This proves how hard it is to currently monetise on Android," CEO Oli Christie told PG.biz via email.

"We sincerely hope that as the Android market matures and as Neon Play learns more about it, we can increase our revenues and downloads on the OS.

"But what it currently proves for Neon Play as a studio is that iOS is still currently king of monetisation."