Accounts for 26% of digital revenue

This accounted for 26 percent of EA's digital revenue and 7 percent of total sales.

On a trailing 12 month basis (a metric the company is now using religiously), EA Mobile's annual revenue is $268 million, compared to $230 million for its formal FY11 period. 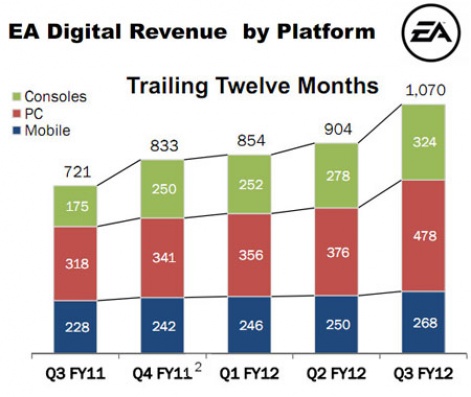 The company claimed it was the number one game publisher in the Apple App Store during December, also highlighting that The Sims: FreePlay reached the number one position on the list of top-grossing iPad Apps.

Combined mobile, DS and PSP sales (what EA labels Mobile and Handheld) were $99 million, down 24 percent year-on-year due to the continued falloff from the portable consoles).

It's likely this total includes additional sales from recent acquisitions, notably PopCap, that can't be included in the formal GAAP rules.

EA said that PopCap sales were up 30 percent on a trailing 12 month basis. Around 30 percent of PopCap's 2010 sales were thought to be from mobile activity.

"We are pleased to report a strong holiday quarter driven by Battlefield 3, FIFA12 and a strong showing by our digital games and services," said CEO John Riccitiello.

"We recorded our highest operating cash flow in 31 quarters and grew segment share in both Europe and North America," added CFO Eric Brown.

Flat by the book

Cash flow from operations was $475 million.

EA ended the quarter with cash, cash equivalents and liquid securities of $1.8 billion compared to $2.0 billion 12 months ago.

It also has a convertible debt of $534 million raised for PopCap acquisition.