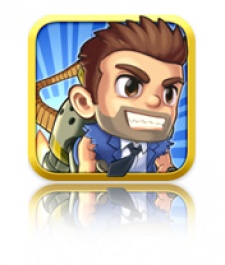 February 9th, 2012 - 12:17pm
By Matt Sakuraoka-Gilman
The last time we heard download figures from Halfbrick's Jetpack Joyride, it had reached 600,000 downloads, after managing to reach 350,000 within its first week.

Since then the game has been made free (with IAP) and the latest figures show an substantial growth, up to 13 million.

We're also told to expect a an update to the game to arrive in March, what Halfbrick calls in a statement the "biggest content update for Jetpack Joyride to date".

The winner is...
Jetpack Joyride has won a number of awards since its release, including The Unoffical Apple Weblog's 2011 Best App Ever award as well as earning a mention among USA Today's Top 10 Video Games of 2011.

"The expansion of the Fruit Ninja brand has been very important for us, but being able to learn more about different monetisation models, pricing structures and the value of ongoing content in Jetpack Joyride has been huge," said CMO at Halfbrick Phil Larsen, in our 2011 in review interview with him at the start of 2012.

"It was very valuable for everyone at Halfbrick to see how this game played out. We've learned so much about the market this way and were able to simultaneously bring an awesome game to mobile.

"Jetpack Joyride has been huge for us."