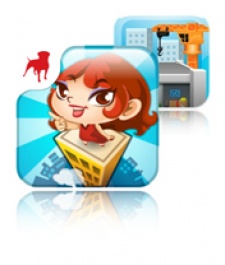 February 15th, 2012 - 12:20pm
By Keith Andrew
Zynga was no doubt hoping the furore surrounding Dream Heights  the game accused by many of copying NimbleBit's Tiny Tower  would die down before the game launched worldwide.

The title's official launch on the App Store, however, appears to have done little more than reignite the debate.

Users on both side of the Atlantic are downloading the free release en masse simply to give it a one star rating, posting negative reviews making clear reference to its similarity to Tiny Tower.

Overall, Dream Heights currently has a one and a half star rating in the US, with hundreds of negative reviews branding the game a "blatant rip off".

Zynga quickly updated Dream Heights to version 1.1 in response  a process that resets both the front page of user reviews and allows the game to earn a new star rating.

Nonetheless, the current version is currently sitting on an average score of two and a half, with the number likely to fall back down if the trend for negative reviews continues.

In the UK, the game is fairing even worse, with version 1.1 currently sporting an average review score of one star out of five.

Gross or grossing
Zynga coupled the game's launch was with a statement posted on its official blog pointing to other "classic games" in the genre, claiming those working at the publisher are "huge fans of the existing games that have preceded Dream Heights".

Indeed, PG.biz has even been tipped off that Zynga employees  such as producer Matthew Ott  have taken to the App Store in an attempt to redress the balance, posting five star reviews to try and lift the game's score.

Nonetheless, Dream Heights currently remains outside both of the US and UK top 200 grossing apps, coming in at #106 and #162 respectively on the rundowns of free releases.

In contrast, Tiny Tower is currently #21 in the US top grossing chart and #39 in the UK.

Reply
I like Dream Heights - it's much better graphics and sound wise to Tiny Tower, just my feeling of course - but I deleted TT after becoming slightly bored, yet Dream Heights I'm still playing...
Posted 9 years, 11 months ago