February 28th, 2012 - 05:34pm
By Keith Andrew
A matter of minutes after CNBC reported iPad 3 was set for an imminent unveiling in New York, Apple itself has cut the chatter by naming a place and date for the tablet's big day: San Francisco, 7 March.

Invitations have been sent out to the press inviting them to an event at 10am PST (around 6pm GMT) where Apple's next tablet will take the stage.

The invitation itself comes with the claim that the hardware in question is something attendees needs to 'see and touch', suggesting the much-rumoured retina screen is set to see the light of day. 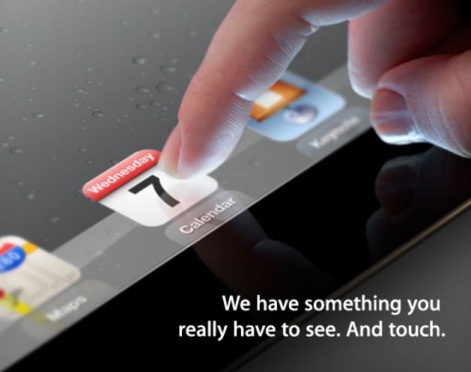 Indeed, the picture itself depicts the kind of crisp, clear display only a high-resolution screen would be able to deliver.

A matter of timing

Shares in the company had already jumped by 6 percent following CNBC's claim an iPad 3 was just around the corner.

The timing of Apple's announcement itself, however, could well generate almost as much interest as iPad 3 itself.

Emails confirming the date were pushed out to the press just as Google CEO Eric Schmidt took to the stage to deliver his keynote speech at Mobile World Congress in Barcelona  a move that could be considered either a happy coincidence, or an intentional play to nab the limelight.