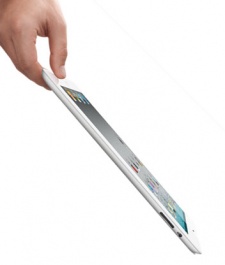 March 7th, 2012 - 12:18am
By Keith Andrew
PopCap's Giordano Bruno Contestabile has given the strongest hint yet that Apple's next iPad will come equipped with a high-resolution display, claiming developers are currently rushing to accommodate the standard.

Speaking during his talk on Bejeweled Blitz at GDC 2012, the firm's franchise manager added weight to claims Apple will unveil iPad HD  rather than iPad 3  at the firm's press conference later today.

"I think that tomorrow every game developer will have to scramble to get a new higher res version of their Apple games on the store," said Constestabile, discussing a plans for a premium version of Bejeweled for the tablet.

"It will be very important to do so, and that's something we absolutely want to address."

PopCap's global mobile business developer director Andrew Stein recently told PocketGamer.biz that developers are scared of any upgrades to iPad hardware, but also noted that the firm's new device will "take portable and tablet gaming up a notch".

"It'll take a little while for the development community to figure out how to balance taking advantage of the ultra-high resolution screen while still maintaining a reasonable memory footprint and sane file download sizes, but once they do, there should be some amazing advances in game experiences," Stein concluded.