March 20th, 2012 - 11:00am
By Jon Jordan, Contributing Editor
We first came across Finnish studio Grand Cru in the summer of 2011 when it decloaked from stealth mode.

Now, however, the developer formed by the principals of Real Network's Mr Goodliving studio has burst into the prime time, announcing details of its $2 million seed funding round and debut game The Supernauts.

Dealing with the cash first, it's received a majority investment from French venture outfit Idinvest Partners, which manages 3 billion in equity.

Other angels include former Google EMEA head of mergers and acquisitions Anil Hansjee, former Wooga head of studio Henric Suuronen, and Nicolas Béraud, who founded of Betclic, one of the leading European betting companies. 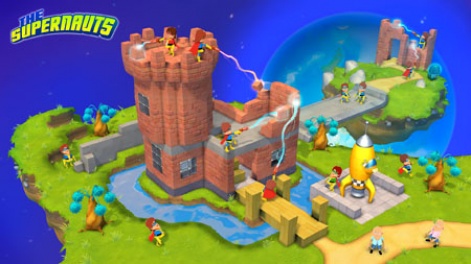 Players take control of their own superhero, armed with a zapper that can be used build or destroy environments block by block, whether engaged in pre-made challenges or general social interactions.

Think of it as Habbo Hotel meets LittleBig Planet and Minecraft, or a 'Superheroic Sandbox MMO'.

"Grand Cru was founded on the principle that the next generation of mobile gaming is real-time multiplayer interaction and user generated content. With the help of our new funding, we are set to be pioneers in the new frontier of mobile and social gaming."
The Supernauts is due to released later in 2012. You can find out more about the game via its website.

The US is investigating TikTok for breaching children's privacy agreement

Kwalee's Line Up: Draw the Criminal draws in 1.5 million downloads in four days