Powered by accelerometers, magnetometers and gyros 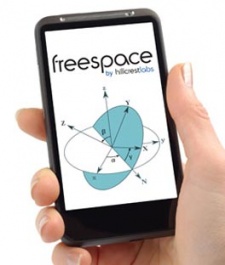 March 30th, 2012 - 01:00pm
By Matthew Diener, US Correspondent
Augmented reality still sits at the periphery of the mobile gaming market.

While the signature heads-up display overlay of AR lends itself well to GPS applications, navigational apps, and marketing gimmicks, its gaming implantations to-date have been somewhat limited.

Part of the reason is the lack of a robust foundation: for example, the majority of AR apps still rely on problematic vision-based technology.

A different approach is being offered by US outfit Hillcrest Labs, however.

It licenses motion processing software to the likes of Logitech and Sony, amongst others, and now it's announced its Freespace MotionEngine software stack.

At its core is an enhanced motion processing system that relies on proprietary algorithms to provide more accurate information from device sensors.

It takes data from a device's accelerometer and magnetometer for 6-axis movement, also including gyroscope where available for 9-axis.

The only limitation is that the Freespace stack has to be integrated at a device level by phone manufacturers.

It's currently available for Android, Linux and Windows 8 devices.