April 5th, 2012 - 08:44pm
By Matthew Diener, US Correspondent
Yesterday, we reported on a Kickstarter project to bring a reboot of the Shadowrun franchise to iOS and Android tablets.

With 23 days left in the drive, it will be interesting to see what the final donation numbers total.

From the outset of the project, US developer Harebrained Schemes promised a PC version of the game to launch alongside the mobile version, and with impressive donation figures shooting past the $436,000 mark (at time of writing), a Mac version will now be developed too. 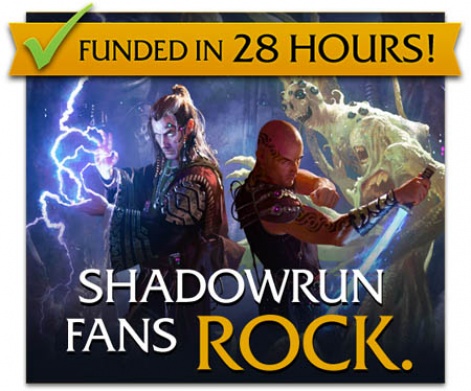 And if funding continues to come in to the project, series creator Jordan Weisman has teased players with additional features such as foreign language support (German, French, and Spanish), PVP deathmatches, online cooperative play, and a Linux version.

But you want to pledge $10,000 or more to get Mike Mulvihill to come to your house and run a tabletop session of the game, there's still one slot available. Apparently, he'll even bring some snacks.

You can find the Kickstarter page here.

The celebratory video is below.