Knocking industry misconception on the head

April 11th, 2012 - 05:18pm
By Jon Jordan, Contributing Editor
OpenUDID is one of possible replacements for app tracking now that the industry has moved away from UDIDs.

However, Ouriel Ohayon, co-founder of Appsfire, the company which is behind the open source technology, says there's an misconception about it.

Most recently highlighted on mobile monetisation outfit W3i's UDID infographic, it concerns OpenUDID's opt-out mechanism, or the perception it doesn't have one.

(Ironically, W3i is a supporter of the standard.)

"Opt-out is hard coded in OpenUDID and presented in the code page," Ohayon replies.

"We write '- Incorporate, from the beginning, a system that will enable user opt-out to match Apple's initial intent'."

Rubbing salt into the wound, W3i lists that SecureUDID - a rival to OpenUDID - does include an opt-out mechanism.

"In fact, SecureUDID decided to use exactly the same opt-out mechanism as OpenUDID," says Yann Lechelle, another Appsfire co-founder, who's the project's main coder.

"So indeed, the graphic is incorrect."

Despite this confusion, OpenUDID is collecting strong support, with the company listing those vendors using the technology (although not all exclusively) in its own graphic, as below. 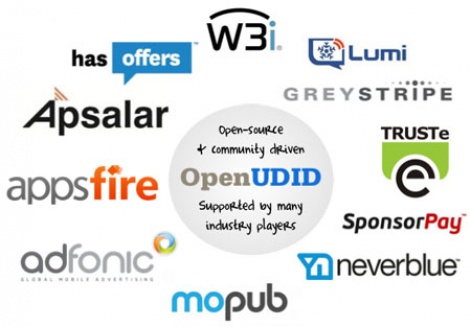