Even Google Play is strong

The new data comes in response to figures published by research firm Flurry in March 2012 that claimed Google Play was being outpaced by Apple and Amazon's stores as much as four-to-one.

TinyCo has hit back showing that this hasn't been the case for Tiny Village which has seen Google Play performing better if not almost on par with Apple's App Store.

According to the developer's figures, average revenue per user from Google Play is up to 65 percent when compared against Apple's App Store. 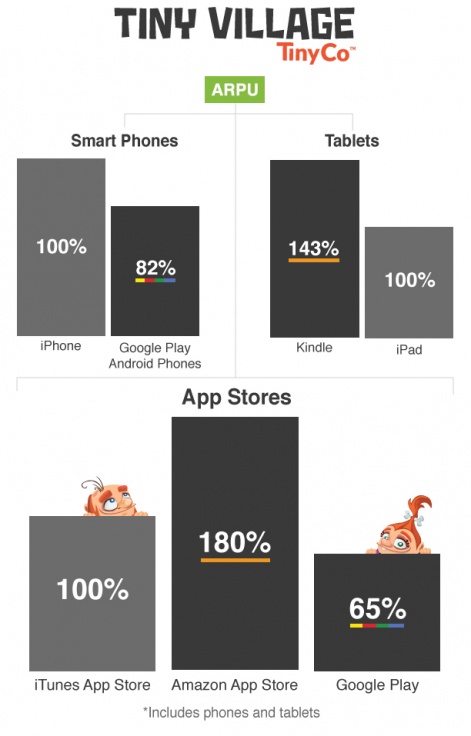 Take tablets out of the equation and this number goes as high as 82 percent bringing Google Play just 18 percent behind Apple.

However, it's Amazon's Appstore that's come out on top described by TinyCo as "a gold mine".

Not only did it win in terms of comparative ARPU with an impressive 180 percent but a breakdown of tablet performance showed Amazon's Kindle was bringing in 43 percent more revenue per user than the iPad.

Following news that Amazon is now allowing developers to charge above $20 for IAPs, TinyCo expects to see Amazon's revenue per user continue to escalate.

TinyCo is aware that this is one of the few examples where Google Play has come out on top stating that the reason some developers might not be seeing the same results is because of a focus on iOS developer and a failure to give the Android versions the same level of quality control.

Tiny Village was the first title to be developed in TinyCo's Griffin engine, an engine that allows the developer to write code once and run it on both iOS and Android with top performance on any device.