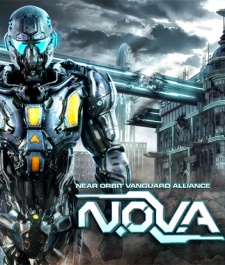 With frustrating brevity, Gameloft has announced the third episode in its Near Orbit Vanguard Alliance series  better known as N.O.V.A  is on the way to iOS and Android.
N.O.V.A. 3 is naturally pitched by the publisher as a "blockbuster sci-fi FPS", though it's the way the firm plans to monetise the release that's likely to generate most interest.

Its release  officially described as coming "soon" - will come after Gameloft made public its move to include in-app purchases (IAPs) in all future releases.

Back in March, Gameloft used its annual financial report to commit itself to IAPs in all of its output on smartphones and tablets in 2012, with the publisher looking to foster a "heavily social" bent.

It's not yet clear whether it'll be a paid release of whether Gameloft will opt for the freemium route, though the publisher has been criticised for the way it's implemented the free-to-play model in some of its key releases in recent months.

More details about the game, presumably including a specific release date and price point, will be revealed soon.

Reply
jon jordan
Yeah, it's going to be paid with IAP like Infinity Blade