May 2nd, 2012 - 12:42pm
By Keith Andrew
Investors are increasingly concerned Zynga's $180 million buyout of OMGPOP may have been a 'serious miscalculation', with unofficial statistics suggesting the number of people playing Draw Something on a daily basis is dropping like a stone.

That's according to Forbes, which claims a decline in Zynga's stock price  down by almost 50 percent since the beginning of March  is a reflection of falling confidence in the firm's management.

Down with the DAUs

It's an argument expanded on by writer Dashiell Bennett on The Atlantic Wire, who  using data sourced from AppData  claims Draw Something is now attracting 10 million DAUs.

That's not a miserly number, of course, but it represents a major drop from the reported 15 million users a day the game boasted at the time of OMGPOP's acquisition. 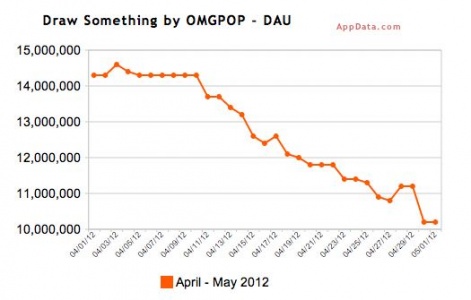 As such, it's claimed Zynga may have made a move for the firm when its lead game was at its peak, with some claiming its current decline was inevitable for those on the outside looking in.

"At the time, Draw Something looked like the next Angry Birds, but whereas that game - with its upgradeable levels and expanding challenges - has stayed at the top of the charts for more than year now, Draw Something has collapsed almost quickly as it peaked," writes Bennett.

"For OMGPOP, the sale could not have been timed more perfectly. Had Zynga not stepped in, the company would be out of money right now, and frankly, few people would have missed it or its game.

"Instead, it's Zynga's management, which has seen its stock price struggle since its IPO late last year, that has to wonder where it all went wrong."

A question of numbers

It's worth noting AppData's statistics are based on Facebook logins  something which Draw Something encourages its users to do, but it isn't a requirement.

Of official statistics, Draw Something downloads topped 50 million in the game's first 50 days back at the start of April, with Zynga branding the game as the "fastest growing original mobile game olf all time."

In comparison, Angry Birds Space recently passed 50 million downloads in 35 days, though said downloads were spread across PC and Mac as well as mobile platforms iOS, Android and BlackBerry PlayBook.